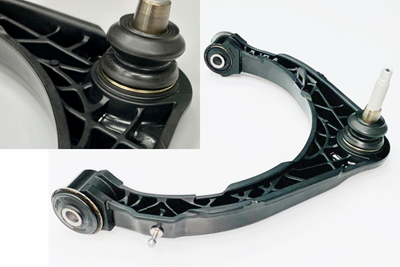 The metallic control arms in motorsports are changing. Currently, their composition is based on a mixture between metal and plastic, becoming hybrid pieces competitive in terms of cost.

This part allows the up and down movement of the suspension in vehicles. At the same time, the control arms are responsible for connecting the axles, wheels and steering knuckles to each other. That is why it is such an important part in motorsports, as they are vital for proper driving.

In Gestión de Compras, we have the technology to manufacture these hybrid parts. Contact us for the developmentof this type of project for the automotive sector.

Normalyy, there are two types of arms that have been developed in the industry: one control arm per wheel and two arms, upper and lower. They were originally made of stamped and welded steel, but corrosion was a frequent problem with these parts. Another of the materials with which these pieces have been worked is with cast iron, for heavy vehicles or SUVs. But its disadvantage was the weight. Recently, another of the materials with which the control arms have been manufactured is cast aluminium, which avoided the problem of corrosion and weight, but whose cost increased significally.

However, recently the company Iljin Group (Seoul, South Korea), has developed the hybrid arm technology. This piece not only eliminates problems existing until now, it also helps to improve certain functionalities of the vehicle. On traditional metal upper control arms, the ball joint cap/cup is a metal box welded to the control arm. Its purpose is to restrict the side-to-side movement of the nkeecap. However, that can cause point stresses in the bearing, which can lead lo increased “end play”, which can contribute to increased wear and noise, as well as reduced service life. 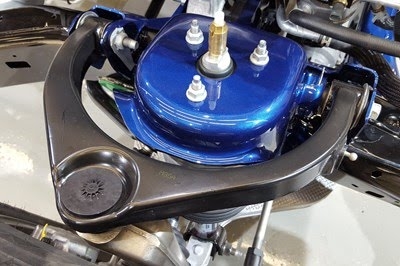 In contrast with the hybrid system, the gap between the pre-greased ball joint cap / cup and the bearing (both inserted prior to injection molding) is encapsulated with composite material during molding, eliminating the need for a flange / welded housing as the ball joint cradles itself properly in the control arm.

The stresses that arise during operation are more evenly distributed, reducing play and wear, which is expected to increase the life of both the joint and the control arm. This aspect is an important benefit of the technology, in addition to the opportunity to reduce weight and achieve a competitive position in costs compared to traditional all-metal systems.

News in the automotive sector

This technology has first reached individual, passenger cars; for many reasons. The first, because these vehicles are designed to carry little weight, so it was easier for the part to meet the load, durability and rigidity requirements. On the other hand, these vehicles are cheaper than vans or trucks, which means less risk when testing new technologies.

However, now this technology has also reached these vehicles with greater weight and load. The Ram 1500 truck was a tough match for engineers who needed to increase the durability and capacity of the vehicle, considering the change to this hybrid control arm, with less mass. The fork-shaped final control arm is approximately 285 x 389 millimeters in size for the left and right front wheels. 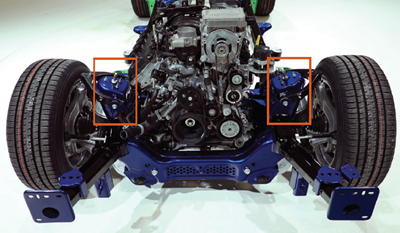 “Because it was the first time the technology had been tested in a light truck, and on a flagship model, we had to meet the same performance requirements as the boom. control gear from the previous generation, which was a steel-reinforced component. On top of that, our Iljin team had its own goal of reducing the mass in the reference control arm weight by 15%. “

The material that had been used in the electric vehicle programs was Ultramid B3WG10 GF50, a 50% fiber weight fraction (FWF) injection moldable short glass fiber / polyamide 6 (PA6) composite. “This grade was selected for its toughness / impact resistance, broad chemical resistance, especially to automotive fluids, and for having a coefficient of thermal expansion [CTE] close to that of steel,” says Tushar Patel, application development engineer for BASF.

The great versatility in plastic extrusion

Which is the best wire forming process